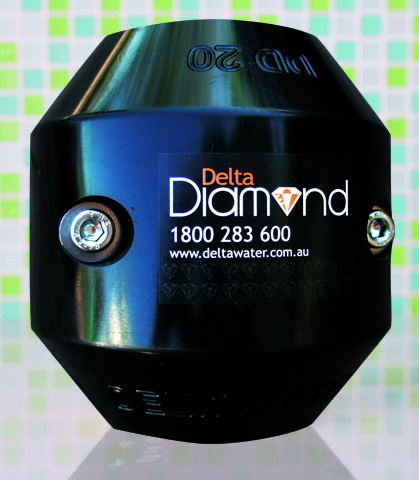 In the suburbs of Western Australia’s largest regional city Mandura, residents are experiencing problems with their town water supply. But one family who has turned to Australian company DELTAwater solutions for help has seen things turn around, and they’re telling all their friends.

Within several hours of Mal and Di Thompson installing a DELTA Diamond, a water treatment system custom made to treat problems in the home and garden caused by hard town water, they noticed an improvement.

“I installed it in the afternoon and when I got up at 3am for a drink, I noticed a difference in the taste immediately,” Mal said. “The next morning the water coming out of the tap was crystal clear. We also noticed when we washed the glasswear and cutlery, they came up crystal clear.”

So excited by the change, Mal went next door to compare water clarity and the glasses washed in DELTA-treated water versus non-treated water and took photos. Since then he’s taken progressive photos all around the house to visually track the changes.

Mal and Di have lived in Mandura for 40 years but in the past couple of years they have experienced an increase in problems caused by the town water including pin holes in their copper piping and green residue around the holes.

Mal spoke to a pumps and irrigation agent who recommended the DELTAwater treatment system which he had installed for orchard and irrigation customers who were experiencing salinity, calcium scale build-up and corrosion.

“We couldn’t be happier with the DELTA Diamond,” Mal says. “We know at least 20 other people who are having this same problem with their copper pipes. We’ve been telling everyone all about it and we know of at least two other people in our neighbourhood who have purchased one.”

Other improvements they’ve noticed are being able to clean sauce stains from their terrine which they’d previously been unable to shift, even with harsh chemicals and scrubbing.

“The stains just wipe straight off, using normal dishwashing liquid,” he says. “Our stainless steel sink now shines right up and everything is so much easier to clean.”

In the bathroom the calcium scale buildup on their shower screen started reducing straight away and is getting less and less every day. “I’ve taken progressive photos of that, it just gets better all the time with the way that’s cleaning.”

They’ve also been able to easily remove black mould on their shower hob that they were using a mould spray cleaner after each shower to try and shift.

“About three days after installing the DELTA Diamond we noticed when we wiped the tiles the mould just slid off when we wiped down with the squeegee.”

Their garden is also benefitting from the DELTA Diamond household water treatment touch.

“We’ve noticed an absolute improvement in the garden too. After about a week the centres of the leaves of the plants started going darker green. That dark green has progressed through the whole leaf now and our garden plants are in much better condition. They are standing up stronger and just all looking fresh and in much better condition than they were.”