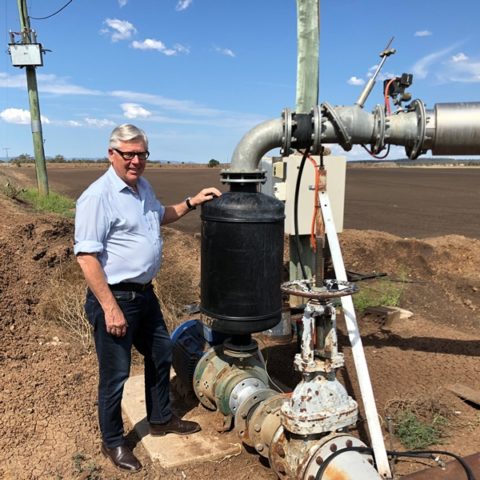 Alex Panov from DELTAwater solutions toured south-east Queensland in early October to visit customers and check how their DELTA water treatment systems were working. One of the farms was a cotton and cereal irrigation farm where a DELTA SU100G28 (100mm/ 4-inch pipe) is halting the increase of soil salinity caused by an irrigation bore with High Class 4 salinity levels.

One Queensland Lockyer Valley grower is growing an extra 4000 bales of lucerne a year thanks to the Australian company DELTAwater solutions’ water treatment system.

For the past 70 years Robert Hogan’s family farm at Helidon has used salty bore water to grow crops. With ideal soils and climate for their cropping and livestock enterprise, the salty water caused some problems in the past but not serious enough to be too concerned.

After floods in 2011 filled the underground water table, the water became even saltier and crops such as lucerne became increasingly difficult to grow.

“We were having trouble with the lucerne after the second watering with it browning off. Over the years too much salt has built up in the ground and eventually it caught up with us,” Robert says.

His local Landmark agent did some water tests and sent them to DELTAwater solutions, whose water treatment systems have been successfully combatting problems caused by salinity, scale, calcium, iron and corrosion for more than 25 years.

Since installing a DELTA unit on his dam in 2015, which contains bore water he pumps from five separate bores, Robert’s lucerne crop has flourished.

Over the whole farm we’ve gone from only doing 17-20 bales a paddock to around 40 bales. In a year that equates to around 4000 extra bales due to having the DELTA.

The region usually gets around 500mm rain a year, but Robert says with ongoing dry conditions and they rely heavily on the bore water. Since installing the DELTA, he hasn’t looked back.

“The paddocks are a lot greener and everything overall is a whole lot better. In the spring and summer it makes a hell of a difference and I’m happy with my DELTA, definitely.”